Albert Fields (1913-1993) and Dorothy Mae (Gill) Doyle Fields (1914-1986) share a headstone with Dorothy on side and Albert on the other. However, Albert was not buried in Eastern Cemetery as he died after burials ceased. According to his obituary, Albert is buried in Green Meadows Memorial Cemetery. Albert was a native of Chattanooga, Tennessee and a World War II Army veteran. According to Indiana Marriage Records, he and Dorothy married in both 1967 and 1971. It is unclear why this occurred. Dorothy was a native of Athens, Alabama. She was previously married to Leo Melvin Doyle who died in 1966 and was buried in the Louisville Cemetery. Together they had four children: Robert, Margretta, Leona, and Shadie. At the time of Dorothy’s death in 1986 she had 29 grandchildren and 36 great-grandchildren. Dorothy’s side of the headstone has a decorative scallop detail with a quote, “Sunset and Evening Star, And one clear call for me!” This is a line from Lord Alfred Tennyson’s poem “Crossing the Bar.” Albert’s side of the headstone contains the next line in the poem, “And may there be no moaning of the bar, When I put out to sea.” It is believed that when Tennyson wrote this poem during his long illness, he expressed his accepting attitude toward death. He requested that this poem be his last published poem. 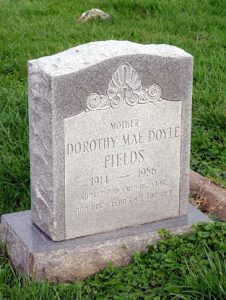 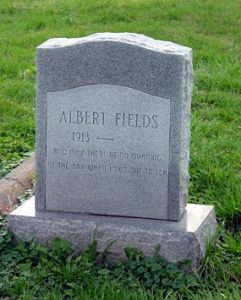