Amelia (Cramm) Kahnt Weise Kress (1840-1934) is buried with her three husbands, which is marked by one large monument. Amelia married Charles “Carl” Kahnt, a furniture dealer, in 1862. Together they had two children: Louisa and Frederick. Kahnt died in 1869 at the age of 43. Amelia married Frederick “Fritz” Weise, a saloon keeper, in 1873. Together they had a son, William. Weise died of tuberculosis in 1884 at the age of 46. Amelia married Christian Kress, a shoe retailer, in 1886. Together they lived at 2035 Bank St. in the Portland Neighborhood. Kress died of appendicitis in 1901 at the age of 65. After his death, Amelia briefly stayed in her home before moving in with her daughter’s family (Emil Beyer and Louisa Kahnt) and her granddaughter’s family (Dean Meads and Flora Beyer). Amelia died in 1934 at the age of 94. 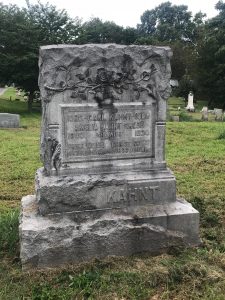