Posted on Aug. 25th, 2020 Comments Off on Anna Margaretha (Roth) Katzmann
Anna Margaretha (Roth) Katzmann (circa 1821-1892) was born in Germany circa 1821. We do not know much about her early life or who her parents were. She used the names Anna and Annie throughout her life. Anna and her husband, William, along with their six children: Henry (15), Anna Margaret (13), John (11), William (9), Anna Elisabeth “Lizzie” (4), and Adolph (2), immigrated to the United States from Germany aboard the ship, Tireland. The family arrived in New York on October 28, 1865. Anna was 43 and William was 42 at the time of their arrival. According to the ship’s log, their destination was Louisville. By the time of the 1870 Federal Census, the couple was living in Louisville. William was working as a blacksmith, and Anna was taking care of the house. All the children were still living at home. Henry was working as a blacksmith; John and William were laborers; and the other children were attending school. Henry married Anna Roederer, daughter of Dora (Hahn) Roederer who we featured last year.
In 1880, the family could be found living at 1115 Christy Avenue (today 1417 Christy Avenue). William was working as a gardener, and Anna was taking care of the house. Three of the children were still living at home. William was a stone cutter, Adolph was a blacksmith, and Lizzie was helping out at home. Anna died on January 15, 1892 at the approximate age of 70. The Mortuary Record indicated she died of “old age.” William died in 1895 of Bright’s disease. The couple is buried at Eastern Cemetery. Neither appear to have a headstone. The photo is a Google photo of 1417 Christy Avenue. Kaye Ackermann, a friend of Eastern Cemetery, requested this biography. She is a descendant of the Katzmanns. 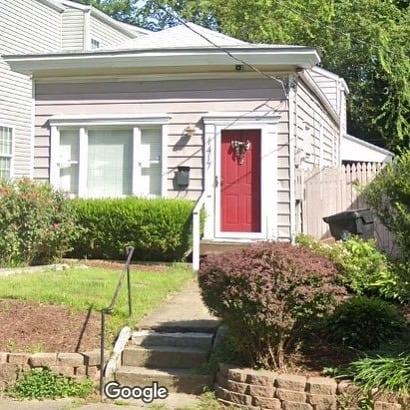