On Armed Forces Day we are celebrating the life of Army Nurse Anna Reid Carfield (1891-1943). She was the daughter of James Carfield and Mary Ann Hegerty who both died when Anna was a young girl. It appears that Anna was raised by her sister Edna and her husband Fred Herman, and Edna was twenty years Anna’s senior. Anna became a nurse for the Army Nurse Corps and was stationed to Base Hospital No. 40, Barrow Unit, in Lexington. On July 12, 1918, she traveled to New York where she boarded the Olympic, the sister ship of the Titanic, which transported troops to Europe during World War I. Much of the Barrow Unit was located in Southampton, England where a hospital opened at manor house Sarisbury Court, but some of the Unit members served in France as well. Anna served her country from April 6, 1918 through April 29, 1919. The American Red Cross recruited over 22,000 professionally-trained female nurses to serve in the US Army between 1917 and 1919. Over 10,000 of those women served near the Western Front. By the 1920s, Anna was a practicing nurse in the Lexington area where she remained until her death of a cerebral hemorrhage at the age of 52. Anna never married and was survived by her sister and three brothers. Thank you for your service, Anna. 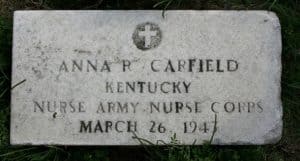