Betsy (Fry) Hopkins (circa 1796-1911) was born in Danville, KY on the Springhouse Plantation. She was the slave of Thomas Walker Fry, the brother of Lucy Fry and brother-in-law of Judge John Speed who owned Farmington Plantation in Louisville. When Thomas Walker Fry’s daughter Mary Ann married Elias Lawrence in Middletown, Fry gave them Betsy and six other slaves. Elias died three years later, and two thirds of his slaves went to his son, Joshua Fry Lawrence. Betsy’s husband Jesse Hopkins was a slave of James Hopkins who owned a nearby farm. Betsy and Jesse had 18 children. Betsy was president of the Sisters of the Mysterious Ten for 50 years. 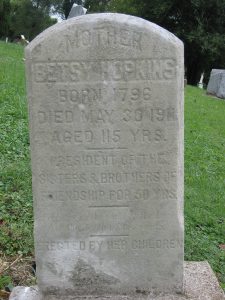