Posted on Sep. 9th, 2019 Comments Off on Caroline (Esch) Hustede

Caroline (Esch) Hustede (circa 1846-1880) was born in Germany and immigrated to the United States. On April 22, 1875, Caroline married William (or Wilhelm) Hustede in Jefferson County. He was also a German immigrant. According to the 1880 Census, William was a dairyman and Caroline was keeping house. The couple lived at 631 Preston and had two children: Lizzie, age four, and Albert, age one. In November 1880, William died of tuberculosis and Lizzie died of typhoid. By December 1880, Caroline had also succumbed to tuberculosis. William and Caroline are buried together at Eastern Cemetery. Their monument is steeped with Christian symbolism. It includes a flaming heart, representative of the Sacred Heart, which is a Roman Catholic devotion. The monument also includes an anchor, which is often translated as hope and strength. Hebrews 6:19, “Which hope we have as an anchor of the soul, both sure and steadfast.” 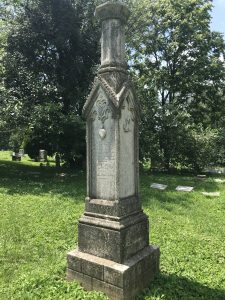