Carrie (Morris) Evans (circa 1842-1905) was born in Iowa. She worked as a tailoress with her mother Rachel Morris. By 1880, she had married Frank Evans, a carpenter, Civil War veteran, and employee of the Sheriff’s Office. They lived in the Portland Neighborhood. Frank died of a “soft brain” in 1895 while living in the Lakeland Asylum (Central State Hospital). In 1905, Carrie’s body was discovered under a railroad trestle at 9th Street with her pocketbook, which contained a deed to a lot in Eastern Cemetery, rent receipts, and Frank’s honorable discharge papers. Police believed she was intoxicated and fell to her death. According to the newspaper article, she had been a member of the Portland Methodist Church and engaged in the neighborhood before becoming an alcoholic after her husband’s death. During this time, she moved around to various charitable homes like the Holcombe Mission and the Home for the Aged and Infirm. Image is from “Courier-Journal” article from April 24, 1905. 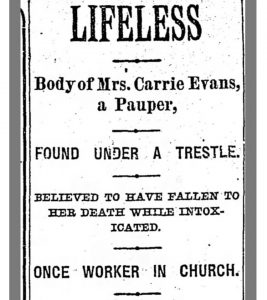