Charles W. Anderson, Jr. (1907-1960) was the son of Dr. Charles W. and Tabetha (Murphy) Anderson. He attended Kentucky State College and Wilberforce University. In 1931, Anderson received his JD from Howard University and in 1933, he passed the bar. Anderson was the first African American elected to the Kentucky House of Representatives, the first African American legislator in the South since Reconstruction, and the first African American Assistant Commonwealth Attorney for Jefferson County. This was the highest judicial position held by an African American in the South at the time. Anderson is credited with a number of early Civil Rights measures, including the Anderson-Mayer State Aid Act, which provided out of state tuition funding for African American students because Kentucky enforced higher education segregation laws. Anderson, a longtime president of the Louisville National Association for the Advancement of Colored People (NAACP), was awarded the Lincoln Institute Key in 1940 for his service to the African American community. He also served as president of the National Negro Bar Association chapter in Kentucky. In 1959, President Eisenhower also selected him as the alternate delegate to the United Nations. Anderson and his second wife Victoria McCall had two children: Charles III and Victoria. Anderson died in a train car accident in Shelbyville in 1960. Image from Kentucky Historical Society. 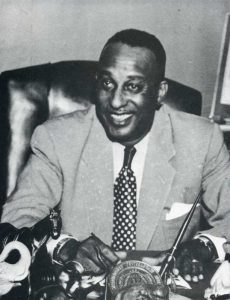