Posted on Aug. 25th, 2020 Comments Off on Cora (De Sha) Barnett
Cora (De Sha) Barnett (circa 1885-1971) was born circa 1885 in Cynthia, KY. Her mother was Caroline Garnett. No information could be found on their early lives. Cora and Caroline were living in Louisville in 1900 as servants for George L. Bacon, a fire insurance agent. On October 1, 1901 Cora married David W. Barnett in Louisville, and together they had four children: Cora, David Jr., Vernon, and Yolanda. Barnett was a mail carrier for the US Post Office, a prestigious profession for African Americans during the Jim Crow era. The family owned a house at 1823 W. Chestnut Street in the Russell Neighborhood. Cora was a social worker and probation officer for the Juvenile Court. According to Carol Mattingly with the University of Louisville, “Although Cora Barnett was involved in social services most of her life, she was also valued for her musical talents. In 1910, when the National Association of Colored Women’s Clubs met in Louisville, Barnett took charge of music, a major part of the conference. She was also a member of the Girls’ Sextet at Louisville Municipal College. She sang at funerals and at charity events in Boston, New York and other major cities, garnering praise for her voice. In 1934, she sang on the radio, a relatively new feature in many homes.”
Their son David Barnett, Jr. was a pharmacist who later became principal at Central High School; he preceded Cora in death at the age of 63, five years after his father. All of the Barnett and Garnett family members are buried in Eastern Cemetery. Two years prior to her death, Cora moved to Norwalk, CT to live near her surviving daughter Yolanda (Barnett) Wilkerson. Cora Barnett died on April 1, 1972 at the age of 87. Her body was cremated, and her ashes were buried in the family plot at Eastern Cemetery. None of the family members have a monument. Many thanks to Carol Mattingly for her research on African American suffragettes. Cora’s obituary is from the “Courier-Journal” April 4, 1972. 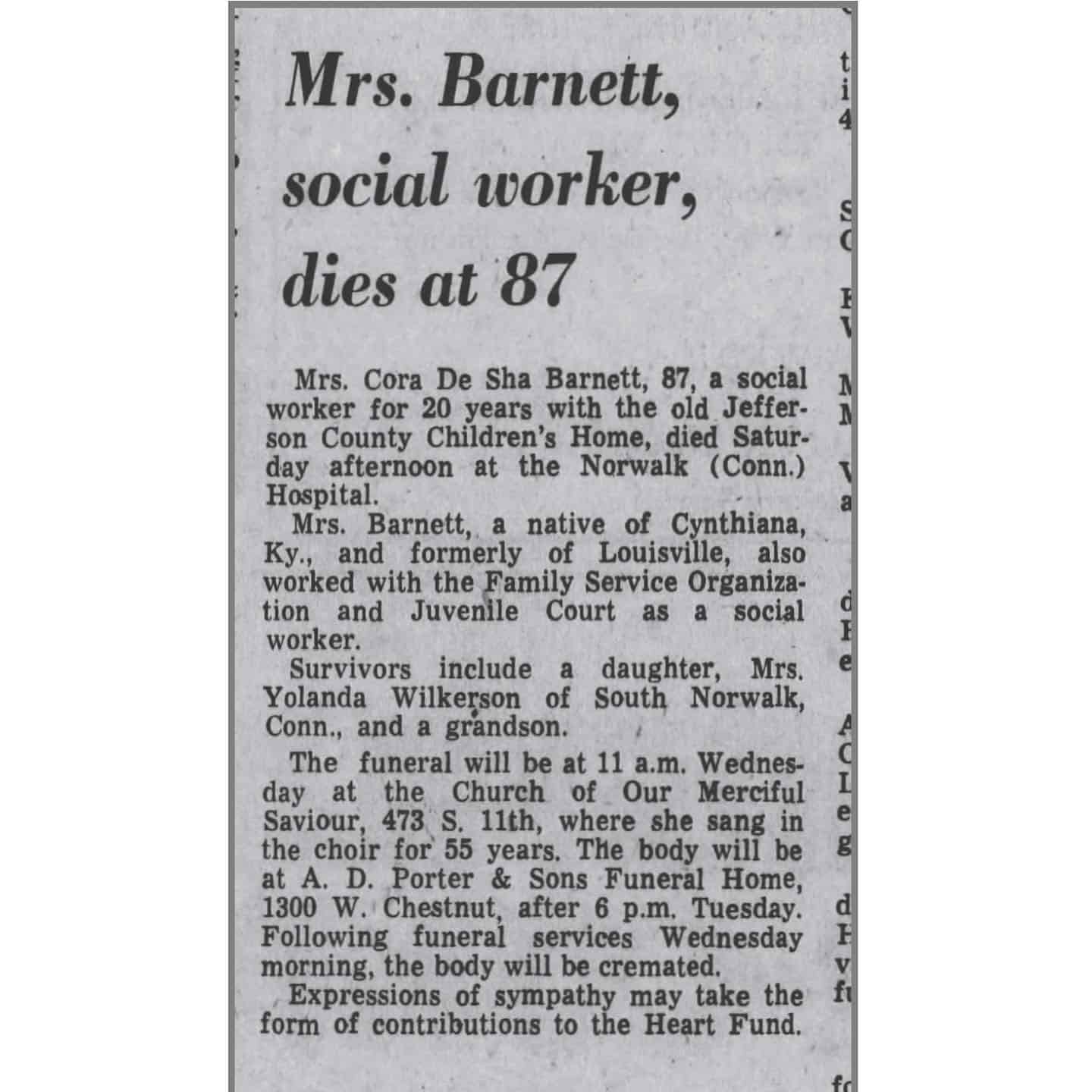