James W. Wells was born on March 17, 1920 in Laurel County, Kentucky to William and Martha Wells. William worked as a coal mine in Harlan County, Kentucky throughout most of his life and had five children. By 1940, James was married to Beatrice Woolum and worked as a coal miner in Harlan County. Their son James Forester was born in 1942. James enlisted in the Army on April 11, 1944 in Fort Thomas, Kentucky. He was sent to the Muskogee Army Airfield in Oklahoma and assigned to the 349th Army Air Forces Base Unit. James’s brother Robert also enlisted in the Army for World War II. James W. Wells lived in Louisville after the war and died on January 1, 1971 at the age of 50. 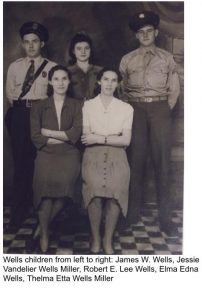