David “Davy” Straws (1799-1872) was a slave who bought his own freedom and then became a prosperous barber. He later expanded his business to include an in-vogue Bath House. His shop was located at the rear of the Louisville Hotel, near Sixth Street, and he serviced the neighborhood for over 30 years. He was also a successful real estate investor, which enabled him to provide a substantial amount of the funding for the establishment of the Fourth Street Colored Methodist Church at Fourth and Liberty. Article from “Louisville Daily Courier” January 1, 1852. 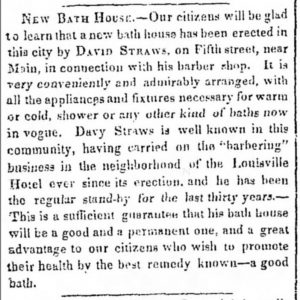