Posted on Sep. 9th, 2019 Comments Off on Diana Thompson and Dinnie Thompson

Diana Thompson (1818-1895) was enslaved by the Speed Family at the Farmington Plantation. Mary Speed enslaved Diana for her personal use during the time Abraham Lincoln visited Joshua Speed at the Plantation in 1841. In 1854, Mary Speed moved Diana and her family to her home on 5th Street. Diana married Spencer Thompson and gave birth to Dinnie in 1857. Spencer died a year later. Diana tried to escape slavery with Dinnie several times, but they were captured each time. They were freed in 1864 and traveled to Indianapolis to view President Lincoln lying in state. Dinnie Thompson (1857-1939) was educated in the public school for black students. She was a maid at the Neighborhood House from 1913 until her death in 1939. Dinnie was an officer in the St. Mary Chapter of the Sisters of the Mysterious Ten, a benevolent African American group. Diana and Dinnie are buried in unmarked graves in Eastern Cemetery. The photo of Dinnie is from a “Courier-Journal” article from February 21, 1997. 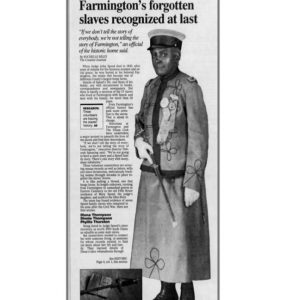