Posted on Sep. 9th, 2019 Comments Off on Dr. Orville Ballard

Dr. Orville Ballard (1896-1972) was born on August 20, 1896 in Lexington, KY to Dr. William Henry and Elizabeth “Bessie” Hudson (Brady) Ballard. Orville had three brothers and two sisters. Dr. William Ballard was a pharmacist in Lexington for 54 years. We are not exactly sure when Ballard married Kathryn Wise but between 1929 and 1939, the couple had four children: Pamela, Kathryn, Orville, and Bruce. Two of which, Kathryn and Bruce, became doctors. Ballard attended Howard University in Washington, DC where he received his medical degree in 1923. He interned at Kansas City Hospital and by 1924 was in private practice in Louisville, KY. In 1928, Ballard became a senior resident physician at Waverly Hills Tuberculosis Sanatorium. He would hold this position for the next 31 years. Ballard was a lifelong advocate for the advancement of African Americans in the medical field. In 1941, Dr. August Schachner donated a 1,000 volume medical library for the use of African American doctors. The dedication ceremony was held at the Western Library. Ballard was quoted as saying to Dr. Schachner, “You will live forever in the hearts of the Negro medical fraternity.” In 1943, Ballard won the Howard University first annual award for distinguished public service by an alumnus for his work at Waverly Hills. In 1953, Ballard made national headlines when he and Dr. Grace M. James were the first African Americans to join the faculty of a southern school: University of Louisville. Ballard was a member of Quinn Chapel AME Church, Falls City Medical Society, Alpha Phi Alpha Fraternity, and Psi Boule of Sigma Pi Phi. He died on December 29, 1972. At the time of his death, he was living at 661 S. 44th Street in the Shawnee Neighborhood. Photo of Ballard and Dr. Schachner is from an April 26, 1941 “Courier-Journal” article. Single photo of Dr. Ballard is from “Courier-Journal” December 17, 1953. 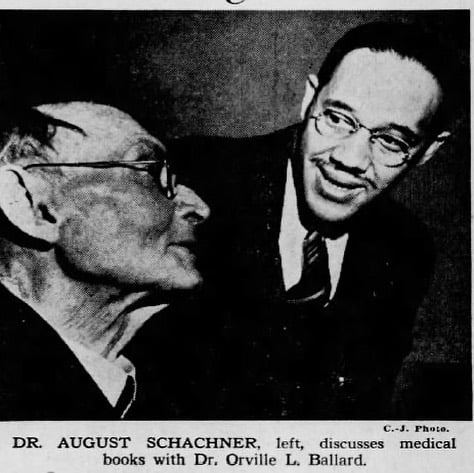 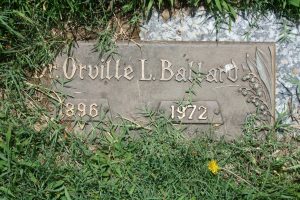