Posted on Sep. 9th, 2019 Comments Off on Eliza (Fitzsimmons) Baker

On this St. Patrick’s Day we will share Eliza (Fitzsimmons) Baker (circa 1828-1873) who was born in Ireland. It is unclear when she immigrated as there were several Eliza Fitzsimmons in the immigration records. At some point she married Eli Baker and became a housewife. Together they had five children: two sons and three daughters. Eliza died of cholera at the age of 45. Louisville saw 7 separate cholera epidemics due to unsanitary conditions affecting the water supply. Eliza died during the 4th epidemic as did 50,000 Americans across the country. Very few were safe from the cholera epidemics including the Rowan Family at Federal Hill, also known as My Old Kentucky Home. In July 1833, 26 slaves and 4 members of the Rowan Family, containing John who had just been appointed President Andrew Jackson’s Secretary of State, died of cholera. Image of patent from picryl.com. 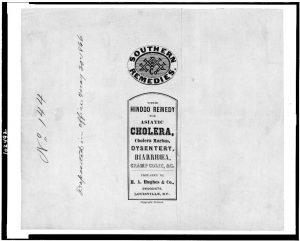