Posted on Sep. 9th, 2019 Comments Off on Elizabeth (Lockner) Bisinger

Elizabeth (Lockner) Bisinger (1845-1896) was born to Eustin and Mary Lockner in Saxony, Germany on April 12, 1845. She immigrated to the United States with her parents. Although her date of immigration is not evident, she first appears on a public record in the 1860 Census as a 14-year-old living with her parents. Elizabeth married Anton Bisinger, also a German immigrant. Together the couple had seven children: six daughters and one son. Anton served as a Union soldier, during the Civil War. He died in 1879 (his headstone says 1877) at the age of 37 of caries of the ribs and an abscess of the liver. Civil War pensions were distributed to soldiers, or widows of soldiers, whose disability was attributed to injuries or disease directly related to their military service. Elizabeth was able to draw a military pension after Anton’s death, so it is likely his death was related to the war. According to the 1880 Census, Elizabeth was a widow living on Mary Street with all seven of her children. By 1901, five of her children had succumbed to tuberculosis. In the Bisinger family plot at Eastern Cemetery, you will find Anton and Elizabeth along with four of their daughters: Annie, Lena, Minnie, and Lizzie. 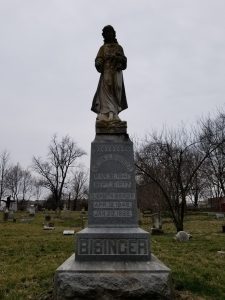