Franz “Frank” Schubert (1816-1885) and Anna Margaretha (Kappeser) Schubert (1826-1885) immigrated to the United States from Germany. He was a saddler and collarmaker, and she was a homemaker. Together they had six children. Frank and Anna spent a large part of their lives on Mary Street in the Germantown Neighborhood. Frank died in February 1885 of dropsy while Anna died in August 1885 of paralysis. The Schubert monument is in German and features a large arch with Franz’s information on the left side and Anna’s on the right. The center of the arch shows two hands clasped between the words, “Vater und Mutter,” which means father and mother. Clasped hands are frequently seen on double monuments to symbolize holy matrimony or the eternal union of husband and wife. Several of these identical double stones can be found at Eastern and many are in German. Frank and Anna’s sons, Casper and Frank, and daughter, Anna Katharina “Katie,” are buried next to them. 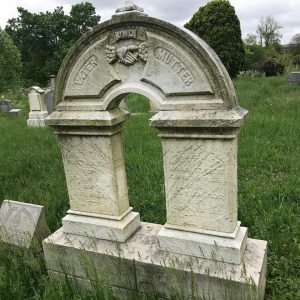