Fredrick L. Buyer (1850-1891) was born in New York City to Katherine and Jacob Buyer, German immigrants. Jacob was a carpenter and “Kath” was a homemaker. Fredrick, or Fred, was the Buyer’s first of eight children. By the 1850s, thirty-five percent of the population in Louisville was German. According to the 1870 Census, the Buyer family was living in Louisville. Their children ranged in age from 19 (Fred) down to 5 (Everhart). Fred, following in his father’s footsteps, was also a carpenter. Fred died at the age of 41, of phthisis pneumonia, which was likely a form of tuberculosis. His headstone is simple, but it tells us things about his life. His life began in New York. The single, in bloom, thornless rose is often recognized as a Christian symbol of the Virgin Mary who is referred to as the “rose without thorns”. The Christian reference is further supported by the badly worn inscription at the bottom of the stone that includes the words “called home” which indicates Fred was called to Heaven. 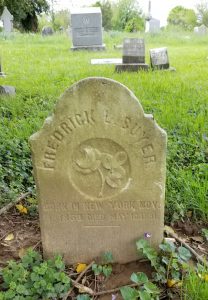