Harvey Clarence Russell, Sr. (1883-1949) was born in Bloomfield, Kentucky. He attended school at Kentucky State Normal School (Kentucky State University), Simmons University (Simmons College of Kentucky), and University of Cincinnati. Russell had a long, distinguished career as an educator. He taught at Bloomfield public schools, Frankfort Normal School, Booker T. Washington Elementary School, and Louisville Normal School. Russell was also dean of Kentucky State College and president of West Kentucky Industrial College. Russell was president of the Kentucky Negro Educational Association, a founder of the Domestic Life and Accident Insurance Company, a grand master of the United Brothers of Friends, an educational columnist for the “Louisville Leader,” and a business manager for Simmons University. Russell lived in the Russell neighborhood—first at 1029 W. Madison St. and then at 2345 W. Chestnut St. The neighborhood was named in his honor as was the Harvey C. Russell Junior High School. 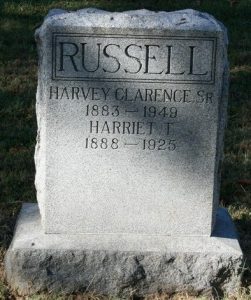