Today the International Order of Odd Fellows celebrates its 200-year anniversary. The order was founded in the US on April 26, 1819 by Thomas Wildey in Baltimore, Maryland. The Odd Fellows are a non-political and non-religious fraternal organization. They are often referred to as the Triple Link Fraternity because of their symbol of three interlocking rings representing friendship, love, and truth. The rings are depicted on Jacob Decker’s headstone as he was a member of the organization. Fraternal organization symbols are commonly seen on 19th and 20th century headstones. Jacob Decker (1847-1912) was born in Germany and immigrated to America with his parents at the age of three. According to the 1870 census, Joseph was a gilder; his father John was a tailor; and his mother Elizabeth was a homemaker. On December 15, 1874, Jacob married Anna Magdalene “Lena” Horstman, who was also a German immigrant. The couple spent a large portion of their lives living on Hull Street in Louisville’s Phoenix Hill neighborhood. They had three sons and two daughters (John Henry, Johanna, Caroline, Adam, and Rudolph). Jacob died in 1912 of heart disease at the age of 65. Lena lived for 19 more years and died of asthma at the age of 81. They are buried together at Eastern Cemetery. 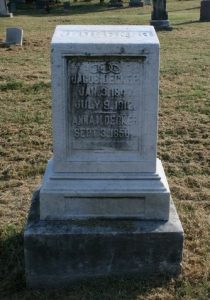