Posted on Sep. 9th, 2019 Comments Off on James C. Cunningham

James C. Cunningham (1787-1877) was born in Bermuda and arrived in Louisville around 1835. As a dance master and prestigious band leader, he played soirees for Louisville’s elite. In 1850 he performed at a masked ball for Louisville socialite Sallie Ward. The “Louisville Morning Courier” described his music as “filling three large parlors with the most delicious tones.” He performed at a ball to honor President-elect Zachary Taylor. Cunningham was also active in the Underground Railroad. Image is from “Louisville Daily Courier” article from October 13, 1848. 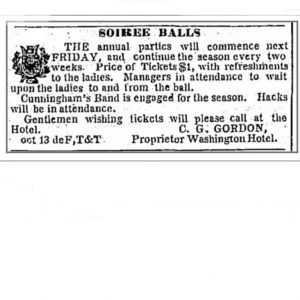