For Workers’ Memorial Day, we are featuring James F. Matthis (1852-1903), the son of undertaker David Matthis and Elizabeth Smith. They lived in Elizabethtown, KY. In 1871, Matthis married Lucy Farris, and they had four children (Margaret, Henry, James, and Mary). After Lucy’s death in 1884, Matthis married Emma Dougherty Moore in 1886. Together they had two children (James and Emma). They lived in Louisville where Matthis worked as an engineer for the Illinois Central Railroad. According to the “Courier-Journal,” on May 15, 1903, James and fireman John Kerr were working the Passenger Train No. 102, north bound from New Orleans to Louisville. As the train approached the depot at McHenry, Ohio County, KY, witnesses said the train “seemed to leap from the tracks.” The train wrecked and derailed. Matthis and Kerr were trapped underneath and killed. The passengers, mail clerk, and baggage master were injured but lived. It was believed that the wreck was caused by something on the track. Kerr, a 26- year-old who lived in Louisville with his parents, Henry and Bridget Kerr, was buried in St. Louis Cemetery. He had been a fireman for four years. Matthis had worked for Illinois Central Railroad for 32 years and had been an engineer for seven years. Members of the Brotherhoods of Locomotive Engineers and Locomotive Firemen attended the funerals. In October 1903, Matthis’s widow, Emma, sued the Illinois Central Railroad and Columbus Givens, the man in charge of the coal station at McHenry. She claimed the engine was defective and that Givens failed to clean the coal off the tracks, which is what caused the wreck. The outcome of the suit is unknown. 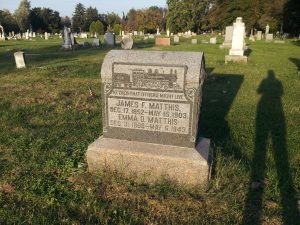