James H. Adcock (1897-1920) was a veteran of World War I as part of the Rainbow Division. On May 4, 1918, he married Rose Sloan, a tobacco worker, in Clark County, Indiana. Two years after their marriage, James died of a gunshot wound to the chest. His death certificate noted probable suicide, but a few days later, Rose was arrested for his murder. The following information is from the “Courier-Journal.” Rose’s sister, Mrs. Grace Jeffries, and her father, Mr. Newton Sloan, were arrested as accessories to James’s murder. On the night of James’s death, neighbors said they heard shouting coming from the couple’s home on Rowan Street. Then they heard a gunshot. A wounded James ran from the home as Mr. Sloan threw bricks at him. James ran into a neighbor’s house and said, “my God, don’t let her shoot me again.” Two days later, James died of his injuries at City Hospital. According to James’s family, Rose and her family led James to believe he was going to get well and persuaded him to say he had attempted suicide. Rose and her family were acquitted. The monument of James H. Adcock is simple in nature. Ferns accent the upper corners of the stone. James lived and died during the Victorian Era. At that time, ferns represented sorrow and sincerity towards other people. 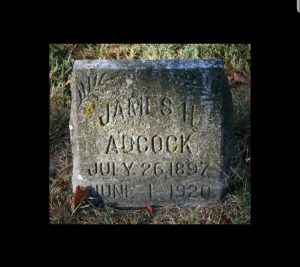