Posted on Sep. 9th, 2019 Comments Off on Jesse Meriwether

Jesse Meriwether (1812-1892) was a slave who was emancipated in 1847 on the condition that he go to Liberia. Meriwether lived in Liberia until 1849 when he returned to Louisville. He was a carpenter by trade and was active in the African American community. In 1850, helped organized the first black Masonic Lodge in secret at his house on Walnut Street between 9th and 10th Streets. After the Civil War, Meriwether was appointed to several boards in the city: School Board’s Board of Visitors, Freedmen’s Savings Bank, and Louisville Cemetery Association. In 1889, Republicans in Louisville’s 6th Legislative District nominated Meriwether for Representative. The motives are unclear; however, when other white Republicans asked him to step down Meriwether refused. He did not win the election. Image from “The Evening Bulletin” July 18, 1889. 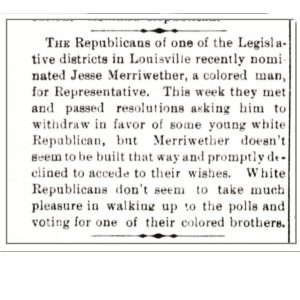