John L. Branham (1810-1884) was born in Kentucky in 1810. According to the 1850 Census, he was a carpenter, married to Ellen. During the Civil War, John was a Private in the Union Army serving in the Kentucky B.5 Infantry. He died of paralysis at the age of 74. It is likely that his death was due to a war related injury because Ellen, who was ten years his junior, was able to draw a pension from the government after his death. The top, center of John’s tombstone has the symbol of clasped or shaking hands. The hands can be interpreted several ways. Sometimes they depict a man’s cuff and a women’s cuff, signifying a marital bond in life that will be reunited in death. Other times it signifies the last handshake between the living and the dead or the handshake of God as he greets the dead, as they enter Heaven. The clasped or shaking hands symbol was also commonly found on Masonic and Odd Fellows tombstones and in those cases can represent fellowship. Just under John’s name, you can see an intersecting square and compass with a G in the center. This signifies that John was a Mason. The letter G in the center of the square and compass stands for God and Geometry. The headstone looks like it was made for John and Ellen, but she was not buried there. 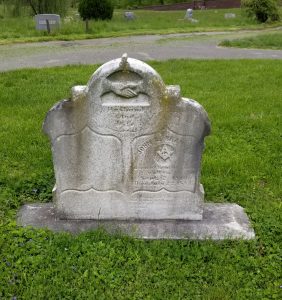