Posted on Sep. 9th, 2019 Comments Off on Joseph and Mary Weingartner

Joseph and Mary Weingartner (1825-1882) (1827-1912) immigrated to the United States from Switzerland. They were married prior to immigration, so Mary’s maiden name is unconfirmed. He was a shoemaker, and she was a homemaker. Together they had eight children. During the Civil War, Joseph became a soldier for the United States Army. At the age of 36, he was discharged due to health complications of heart disease and tuberculosis. He was described as being 5’10” tall with gray eyes and black hair. Mary and Joseph spent a large part of their lives in the Germantown Neighborhood. Joseph died in 1882 at the age of 57 while Mary died in 1912 at the age of 84. The Weingartner monument is a beautiful representation of funerary symbolism. A vase of flowers crowns the top of the monument, which remind us of the beauty of life and respect for the dead. A tassel/drapery motif encases the names of the dead. Large, bold, artistic lettering depicts the family surname WEINGARTNER. Buried at this site you will find Joseph, Mary, and four of their children: Benjamin, Charlie, Eddie, and Louisa. 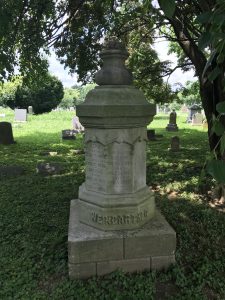