Julia Smith (1849-1867) has a beautiful, ornate headstone teeming with symbolism. The angel is a guardian of death and the lily symbolizes purity, chastity, and innocence. The dogwood flower at the top of the marker is a symbol for Christianity, divine sacrifice, and resurrection while the garland draped over the top symbolizes victory in death. At the age of 17 Julia died from cerebral congestion, which appeared to be a 19th century catch-all. It could have been a stroke or swelling of the brain caused by an infection or trauma. Julia was the daughter of Nancy Smith who is buried next to her. According to census and newspaper records, Nancy was a brothel madame with an establishment on Lafayette Street. Louisville had three main districts for prostitution: Lafayette-Marshall Red Light District (located Preston through Wenzel Streets and Grayson and Walnut Streets), The Chute (located around intersection of Floyd and Jefferson Streets), and Green-Grayson Red Light District (located 6th through 11th Streets and Green and Grayson Streets). 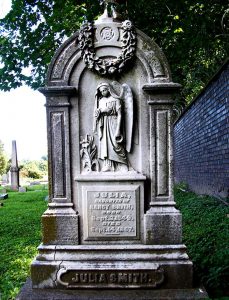 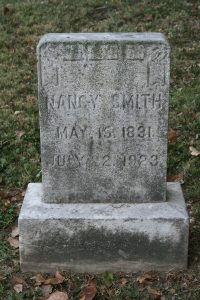