May is Asian Pacific Heritage Month. In our research thus far, we have only discovered two people of Asian and/or Pacific descent buried at Eastern Cemetery. One person we discovered is Kent “Kai” H. Quan (1900-1951), a first generation Chinese American. Born in San Francisco, CA, Kent also known as Kai, could not be found in many records. It is unclear when he married his wife Emily Wu, a Chinese immigrant, but they had six children beginning circa 1933. They lived in New York City for a brief period before moving to Bowling Green, KY and then to Louisville. Emily’s father Richard “Dick” Wu owned several laundries in Louisville in which the couple worked until they opened their own business. Kent and Emily owned the Quan Grocery at 646 Finzer Street in the Smoketown Neighborhood. Kent died of a heart attack at the age of 51. Emily continued to live in Louisville until 1999 when she moved to her daughter’s house in Florida. Emily died in 2000 at the age of 90. The front of Kent’s headstone contains his name in English as well as in Chinese below. The back of the headstone contains three columns of Chinese text. The left side translates to Chikai Town and Sanbanbu Village. The center columns translates to Tomb of Quan, Chongzhou Tianqihong. The right side translates to Canton Province and Kaiping County. The information included and the design of the headstone is a mix of American and Chinese traditions. Photo of the family is from “Courier-Journal” December 2, 1940. 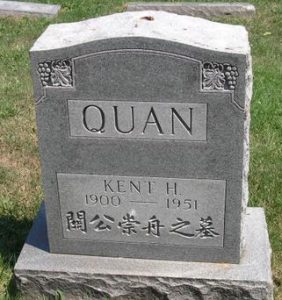 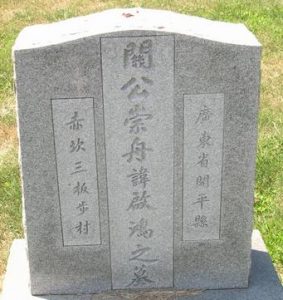 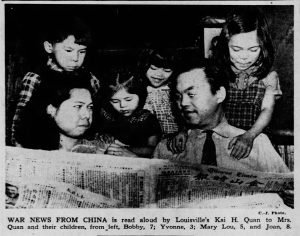