Posted on Aug. 25th, 2020 Comments Off on Lizzie C. Crittenden
Lizzie C. Crittenden (circa 1841-1919) was born in Kentucky circa 1841. We are not sure who parents were, but she was enslaved by politician John Crittenden (Crittenden Drive is named after him). Upon his death, Lizzie was enslaved by his wife Elizabeth. Lizzie became a free person in 1865. She was 24 years old and living in Frankfort, KY. Lizzie never married, and she did not have children. It is not clear exactly when or what brought Lizzie to Louisville, but she was in records in the 1880s. She worked for wealthy businessman William C. Hall and his family for nearly 20 years. Around 1900, Lizzie became a cook at 726 W. Walnut Street (Muhammad Ali Boulevard), the site of Nannie Burroughs’s Woman’s Industrial School and Baptist Foreign Mission Board. Over the next 10 years, Lizzie worked as a domestic in numerous places around Louisville. Lizzie never received a formal education. According to Federal Census records, she was illiterate as a child but became literate as an adult.
As chair of the Simmons College Board and part of the Baptist Women’s Education Convention, Lizzie was a major fundraiser for the college. She was given the honor, with Mamie Steward and Lucy Flint, to break ground for the construction of the girl’s dormitory on April 28, 1908. Lizzie was an active member of the Anti-Separate Coach League, urging opposition to Kentucky’s Separate Coach Law, which required railroad segregation. She, Mary (Cook) Parrish, and others protested locally and at the state capitol. In fact, the railroads opposed the law as it created an added expense. Nonetheless, in 1892, the Kentucky Legislature passed the law. In 1918, Lizzie became a matron at Simmons College where she lived until her death on August 14, 1919 at the approximate age of 78. She was buried in Eastern Cemetery without a monument. Many thanks to Carol Mattingly for her research on African American suffragettes. In the photo of the Baptist Women’s Education Convention officers, Lizzie is seated in the first row on the far left. The photo is from “Golden Jubilee of the General Association of Colored Baptists in Kentucky.” 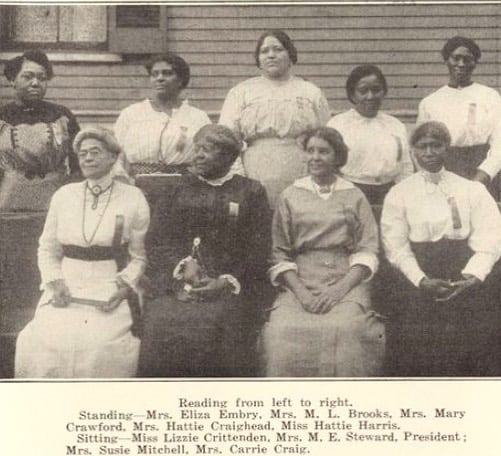