May is Asian Pacific Heritage Month. In our research thus far, we have only discovered two people of Asian and/or Pacific descent buried at Eastern Cemetery. One person we discovered is Lottie Wu (September 30, 1924 – April 24, 1925). Just about everything we know regarding Lottie Wu and her family comes from Lottie’s death certificate. Her father was Hai Wu and was born in the United States. Her mother’s maiden name was Wangsee, but her first name is unknown. She immigrated to the United States from China. Lottie lived a very short life. She died of an edema of the larynx, which can obstruct the upper airways. She was six months old. At the time of her death, her family was living at 658 S. 2nd Street and Hai was working at a Chinese Hand Laundry at 627 W. Broadway. The first Chinese immigrants came to Louisville in the 1920s from Canton, China. Following a tradition of Chinese in the United States, many operated hand laundries with a small few operating restaurants. Kent Quan who will be featured in another post about Asian Pacific Heritage Month also worked in a laundry and was originally from Canton, China. 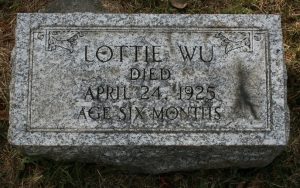