Lou Ann (Hite) Benfield (1857-1904) was from Marion, KY. She often went by the names Lulu and Lula. On January 6, 1880, at the age of 22, Lou married John Benfield, the son of English immigrants. John worked as a fireman for the L&N Railroad. Together the couple had seven children: two daughters and five sons. Lou lost her husband circa 1896 and became the head of the household. According to the 1900 Census, she was living on 17th Street with only four of her children (Emma, Nettie, George, and Jesse Lindel). She became a dress maker to support the family. Her 16-year-old daughter Emma was working as a bookkeeper. Her sons Claude and John were living at the Louisville Industrial School of Reform, a home for orphaned and delinquent youth. It is unclear where her 6-year-old son Lawrence was living. In 1904, Lou died of tuberculosis at the age of 47. Her daughter Emma worked as an attendant and nurse at Central State Hospital and married. Her sons were all working and boarding in houses next door to one another prior to each getting married. Lawrence moved to New Orleans for military service and remained there. Nettie is the only child we could not track after Lou’s death. 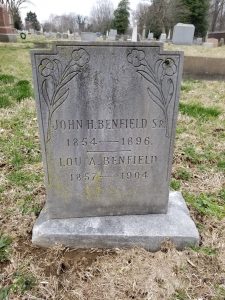