Louisa Dover (1851-1923) was born in Kentucky. Her maiden name is unknown, and it is unclear if she was born into slavery. She married Frank W. Dover, a carpenter, in 1870. They divorced in 1894 after being separated for several years. In 1880, Louisa was working as a domestic for lawyer Charles F. Wing and his family. She also worked as a cook for the Orphanage of the Good Shephard. By 1900, she was renting a house in the alley behind 1223 E. Broadway where she had four boarders. At the time she working as a laundress and a cook. By 1910, Louisa was renting a house in the alley behind 1026 Rogers Street (formerly 1226 Rogers Street), where she remained until her death in 1923. Her house, shown on the 1905 Sanborn Fire Insurance Map (Vol. 5, Sheet 446), was across the street from Eastern Cemetery. Interestingly, Louisa was listed as a widow in all of her census records when she was actually divorced. Frank Dover did not pass away until 1917. Louisa is an example of how difficult it is to research not only women but also African Americans. We could not find any records of her life prior to her marriage or even a marriage certificate. We found her divorce announcement in the newspaper. Her death certificate says her family information is unknown. Therefore, we could not find any documents that listed Louisa’s maiden name. Couple that with the fact that she was also born during a time of slavery and the records become much more difficult to find. 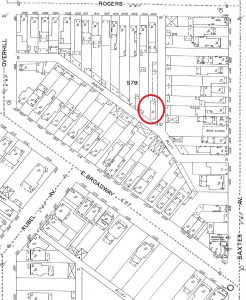