Louisa Faber (circa 1868-1887) was born in Germany. Louis Szczepansky, her childhood sweetheart and fiancé, immigrated to America to make his fortune and send for his betrothed. During the 1880s, nearly 1.5 million Germans immigrated to the United States from Germany to escape economic poverty and political unrest. Louis obtained a job as head cutter at Deppen & Sons in the tailoring department. He sent for Louisa. She first arrived in New York and insisted on working to pay her way to Louisville. Arriving in Louisville a month later, 19-year-old Louisa decided to work as a domestic for George A. Lippold until the wedding. However, she developed typhoid fever and was sent to the City Hospital without Louis’s knowledge. When he discovered what happened, he attempted to see Louisa several times but was denied visitation because she was too sick. When Louis returned after a couple of days, he was told she was dead and her body was taken to a potter’s field. Louis attempted to retrieve Louisa’s body only to find it had been donated to the local medical school because no next of kin claimed it. Louis eventually secured Louisa’s remains and gave her a private burial at Eastern Cemetery. Image is from “Courier-Journal” October 11, 1887. 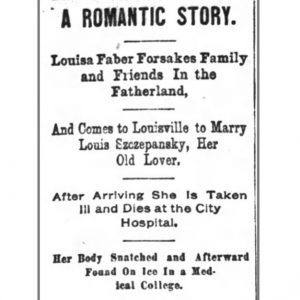