Posted on Sep. 9th, 2019 Comments Off on Louise (Weppner) Waller

Louise (Weppner) Waller (1871-1938) was born in Louisville, KY to F.W. Weppner and Elizabeth Dauber, German immigrants. Louise married Joseph C. Waller, a printer, in 1900. Together they had one son, Lethen, and resided at 1047 E. Kentucky Street in the Germantown Neighborhood. Louise was active in the Harmony Chapter (273) of the Order of the Eastern Star (OES). The OES is an organization closely tied to the Masons. The emblem is a five-pointed star with a series of symbols, colors, and meanings. This emblem is engraved on Louise’s headstone. For that reason, her grave became known as the “witch’s grave.” We have found evidence of people vandalizing her grave, so we work hard to explain the OES symbol and protect Louise’s grave. 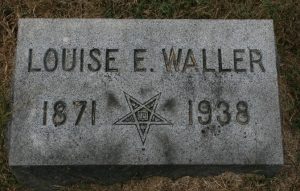