Lucinda (Sale) Shanks (1820-1898) married Thomas Shanks, a brick mason who later became a deputy sheriff. They married in the Methodist Episcopal Church in 1838. According to the 1870 census, the couple had three daughters and Lucinda was “keeping house.” After Thomas’s death, Lucinda operated a boarding house, which was a common occupation for widows at the time. Lucinda died of senility in 1898 at the age of 77. There is not much documentation on Lucinda’s life as she lived in a time that women’s history was rarely documented. However, in 1898, the year of Lucinda’s death, we know sharpshooter/exhibition shooter Annie Oakley wrote a letter to President McKinley offering the service of 50 lady sharpshooters should the United States go to war with Spain. The letter is viewed as the first political move for women’s rights to combat services in the United States Military. Image of Lucinda from Find A Grave user Cameron. 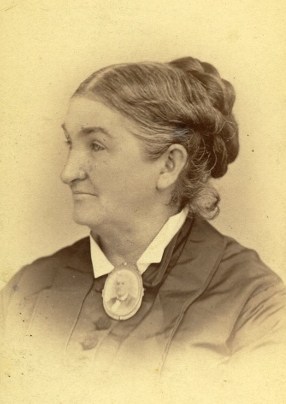 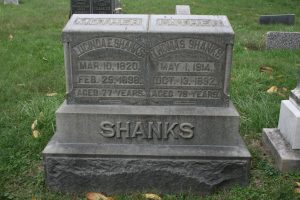