On Armed Forces Day we are celebrating the life of Marine Corporal Henry E. Tribue, Jr. (1934-1969). He was the son of Henry E. and Geneva (Brown) Tribue who lived in Indianapolis, Indiana. From 1952 to 1955, Henry served in the Marines during part of the Korean War. After training at Camp Lejune in North Carolina, Henry was sent to the Atomic Energy Commission Proving Grounds to observe a series of atomic tests. He was stationed at Camp Pendleton in California. After his service ended, Henry and his wife Eva Dathright lived at 2310 Mellwood Avenue in the Clifton Heights Neighborhood. He worked as a foreman at the Ford Motor Company Truck Plant. Henry died at the age of 35 of gunshot wounds received at home in an argument. Tribue was survived by his wife, parents, and five siblings. Thank you for your service, Corporal Tribue. Image from “Indianapolis News” April 22, 1953. 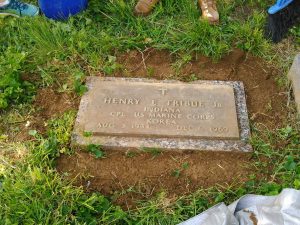 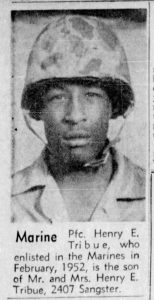