Posted on Aug. 25th, 2020 Comments Off on Mary (Faust) Lotz
Mary (Faust) Lotz (1859-1909) was born to Philip and Margaret Faust in Kentucky. She was a first generation German American as her parents immigrated to the United States in the 1840s. Mary was one of six children. The family lived on Campbell Street, east of downtown Louisville. On October 1, 1885, she married Charles Lotz in Louisville. Charles was also a first generation German American whose parents, Henry Christian and Catherine Lotz, immigrated to the United States in the 1850s. Together Mary and Charles had seven children: Charles Edward, Clarence, James, Minnie, Robert, Charles Wilson, and Bertha. While Mary was a stay at home mother, Charles was a carpenter and then a patrol officer for the 4th Police District. Mary and Charles lived at 2715 St. Xavier Street in the Portland Neighborhood. Mary died on August 14, 1909 at the age of 50. According to her “Courier-Journal” obituary, she had been ill for several months in her home and her death was expected. She was buried in Eastern Cemetery with a headstone she would eventually share with her husband.
The Lotz headstone is shaped like a stack of wood logs. According to Atlas Obscura, “The customs around death were starting to focus more on the deceased’s life and the people left behind, and a tree proved a powerful symbol of both eternity and humanity, recalling the Bible’s tree of life and tree of knowledge.” There’s a common misconception that all tree or log headstones are related to the fraternal organization, the Woodmen of the World, as many of their members’ headstones were of this design. However, they are only a small fraction with this type of headstone. 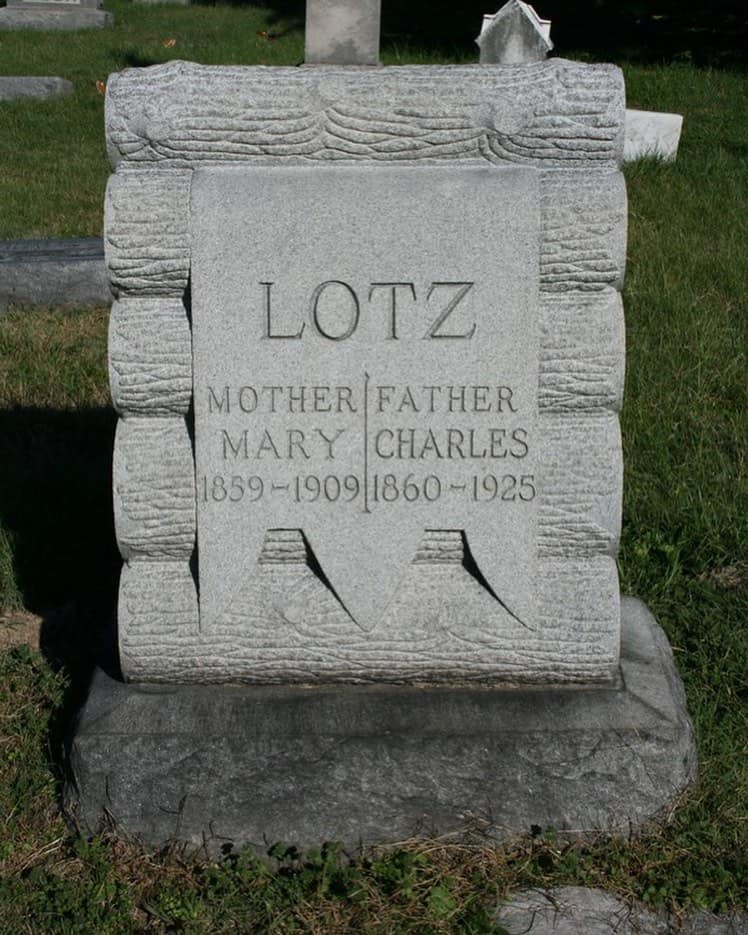