Mary Jane (Constable) Gibson (circa 1828-1880) was born to free blacks in Baltimore, MD where she married William H. Gibson in 1850. They then moved to Louisville after Gibson had established a school for African Americans in the basement of a Methodist Church at 4th and Green Streets. Mary Jane taught sewing and dressmaking at the school. Her husband was a well-known educator and community organizer. In 1877, he helped establish the Colored Orphan’s Home on 18th and Dumesnil Streets. Mary Jane was among the women who worked to support the Home. She and William had six children of which three also became educators: William H., Jr., Lucretia, and Mary Jane. Lucretia Gibson (circa 1870-1956) taught at Booker T. Washington School (principal Albert Meyzeek) and Western Colored School. She was one of the organizers of the Louisville Choral Society with the Minnis sisters and was organist of the Quinn Chapel AME Church Sunday School. Lucretia was also a member of the Kentucky Association of Colored Women’s Clubs with the Nugent sisters. 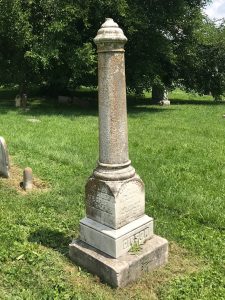