Mary Jane Fischer, R.N. (1877-1974) was born in Kentucky on October 15, 1877 to Henry Phillip Fischer and Louise Amelia Becker. She never married, but she was educated at the Louisville School of Nursing and University of Louisville. At the young age of 20, Mary volunteered her services as a nurse during the Spanish American War (1898). The Spanish American War was the first war involving the US in which nurses were assigned as a special military unit. At the age of 36, Mary offered her services as a nurse during World War I (1914-1918). After the wars, Mary continued to work as a nurse in the Cincinnati area. She was cited by the US Public Health Services for her work during the national influenza epidemic (1918-1919). Mary died in a nursing home in Cincinnati, OH at the age of 97. Before her death, she was the oldest living graduate of the Louisville School of Nursing. 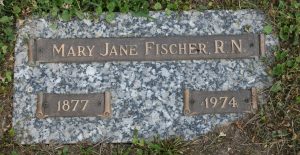