Mary Stella (Zanone) Baker (circa 1877-1932) was the daughter of John Thomas Zanone and Anna Bailey who are also buried at Eastern Cemetery. Zanone was a first generation Italian American. On January 24, 1906, at the age of 22, Mary married Jesse Gerald Baker, the son of Eli Baker and Eliza Fitzsimmons, who we featured earlier this month. Jesse worked as a carpenter and Mary was a housewife. Together the couple had three children: two daughters, Viola and Stella, and one son, William. In 1916, Stella died at the age of 4 of whooping cough. In 1932, Mary died at the age of 55, and her husband Jesse died in 1942. Their son William worked as a golf caddy before joining Company G, 26th Infantry, 1st Infantry Division during World War II. William died in 1944 of multiple shrapnel wounds near Aachen, Germany. He was survived by a wife and son. Mary’s daughter Viola married Edward Weiss and worked as a proofreader for the American Printing House for the Blind. She died in 1999. Image from Ancestry user Pat Baker. 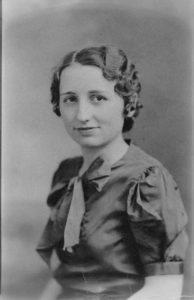