Mary (Wilson) Lusco (1931-1969) was born in Sprague, WV as the daughter of Matthew and Maggie Wilson. Her father was a coal miner. Mary was a Private First Class in the Women’s Army Corps (WAC) during the 1950s. She was stationed in Fort Monmouth, NJ and Fort Holabird, MD at a time when there were not many African American women in the WAC. She had a son, Jarvis F. Wilson, who was also in the Army, prior to her marriage to Lovell M. Lusco in 1964. Together they lived at 716 S. 19th Street in the California Neighborhood. Lovell was a WWII veteran and worker at the VA Hospital. Mary was a clinical technician at the children’s hospital. 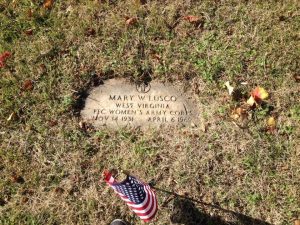