This monument for Matilda M. (Shull) Hooge (circa 1835-1869) features a hand with the index finger pointing up. There are many interpretations of monument symbology, but this one generally means the person has passed on to Heaven or the hand is showing the path to God. Religion featured prominently in 19th century life especially with disease epidemics and lack of medicine. Matilda died at the age of 34 from small pox. Matilda married Louis Hooge on October 12, 1856 in Warren County, MS. She was the daughter of John and Sarah (Pfouts) Shull of Hartford, OH. Her husband Louis, a German immigrant and jeweler, survived her as did their four children: Oscar, Clara, Thomas, and Ida. They lived in Vicksburg, MS prior to moving to Louisville. Louis was later remarried to Jennie Hogue and was buried in Fairview Cemetery in New Albany, IN. 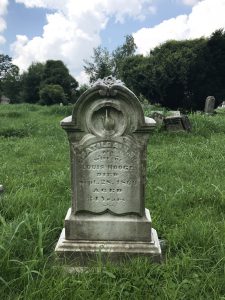