Matilda “Minnie” Erb (1858-1943) was born in Louisville, Kentucky. Her mother and father were from Germany. Matilda also went by the name Minnie. She never married and spent much of her adult life living with the family of her sister, Wilhelmine Emmons, who also went by Minnie. As a matter of fact, at the time of the 1930 census, the following “Minnies” were all living together at 4110 West Broadway: Minnie H. Emmons (Matilda’s sister, Wilhelmine) age 65, wife of John Emmons; Minnie M. Boylan, age 38, daughter of John and Minnie Emmons, wife of Howard Boylan; Minnie M. Boylan, age 14, daughter of Howard and Minnie Boylan, granddaughter of John and Minnie Emmons; and Matilda “Minnie” Erb, age 66, sister-in-law of John Emmons. John worked as a traveling salesman for a uniform manufacturing company and owned the house located at 4110 West Broadway. Image of Matilda from Find A Grave user Karen Shirar. 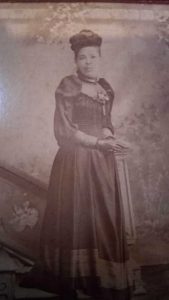