Nola (Coones) King (circa 1872-1922) was born to Nelson and Winnie (Duncan) Coones. Nola was the youngest of six children. On October 4, 1890, she married William Nolan King, and together the couple had four children: Eva, Eugene, Ruth, and William, Jr. By 1900, Nola and her family were renting a house on W. Walnut Street. Her husband W. Nolan was working as a mail carrier. By 1910, the family was living in a house they owned in the Russell Neighborhood located at 2115 Magazine Street. While Nola King was never recorded as having a job, she was active in various groups. Nola was a member of the State Society of Christian Women and the National Council of Good Samaritans. In 1915, Nola was a captain of a fundraising campaign for the Louisville Chapter of the National Association for the Advancement of Colored People (NAACP) to make a legal case against segregation. Other captains included Dr. John A.C. Lattimore , Albert Meyzeek , William H. and Mamie Steward , Rev. John H. Frank, and Rev. Henry Wise Jones. She was also on the executive committee of the Louisville Chapter of the NAACP. According to the “Louisville Leader,” Nola was also president of the Colored Women of Louisville, known as the National Woman’s Industrial Association, as well as a chairman of the Lincoln Independent Party, which was a political party created in Louisville in 1921 by African Americans. In 1921, the party nominated Nola to the Park Commission. She was not elected. Nolan and W. Nolan were members of the Third Christian Church and considered driving forces behind many of its programs for the community. W. Nolan died on March 7, 1919. Nola died on November 14, 1922. She and her husband are buried in unmarked graves in Eastern Cemetery. On September 24, 1921, the “Louisville Leader” said this about Mrs. W. Nolan King, “of the best known women in Louisville and Kentucky, a leader among women in politics and all that means for the good of the race and community.” Photo is from “Louisville Leader” November 18, 1922. 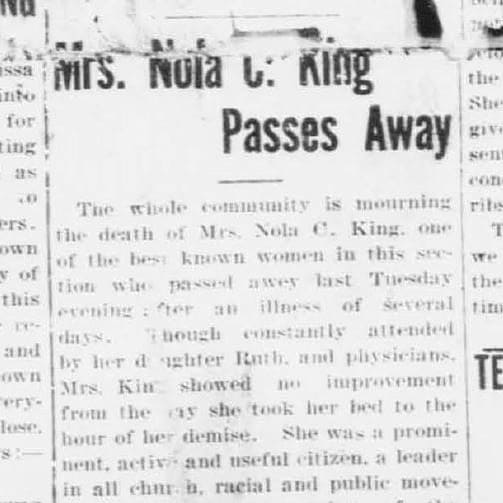