Posted on Aug. 25th, 2020 Comments Off on Olga (Cernavs) Brackovskis
Olga (Cernavs) Brackovskis (1904-1989) was born to Georgs and Marija (Saat) Cernavs in Riga, Latvia on Christmas Eve 1904. We know nothing about Olga’s early life. During World War II, the Soviet Union occupied Latvia. However, in the summer of 1941, the Nazis took control. At first, the Germans were considered liberators from the Soviet Union. That soon changed when anyone who was deemed racially unacceptable, who opposed the Germans, or who cooperated with the Soviet Union were killed or sent to concentration camps. In 1944, the Soviet Union reoccupied Latvia, and it remained a part of it until 1991. In 1948, President Harry S. Truman passed the Displaced Persons Immigration Act to help refugees from Eastern Europe immigrate to the US.
On August 25, 1949, Olga, age 44, her husband Pavils Brackovskis, age 49, and her mother Marija Cernavs, age 67 and widowed, arrived in New York aboard the USS General Stewart as “Displaced People.” According to the ship’s log, their destination was Whitesburg, KY. The log said Olga and Marija were housewives and Pavils was a plumber. It is unclear when the family moved to Louisville, but they were listed in the 1956 city directory living at 4139 Dumesnil Street in the Chickasaw Neighborhood. On May 10, 1957, Marija died of heart disease. At the time of her death she was living with Olga. Her obituary noted she had several grandchildren and great grandchildren, but we found no information on them. According to the “Courier-Journal,” Pavils was guardian of Eduards Lusis, a fellow Latvian immigrant who he worked with at Lorillard a division of Loews Theatres, which was a tobacco company. On June 13, 1974, Pavils died. His obituary stated that he was a retired lineman for Lorillard and living at 5001 Southside Drive in the Southside Neighborhood. His only survivor was Olga. On February 14, 1989, Olga died from lung cancer at the Hillcrest Healthcare Center in Jeffersonville, IN. According to her obituary, she was survived by Laima Beirzin, a cousin living in Ontario. Olga, Pavils, and Marija share a monument. 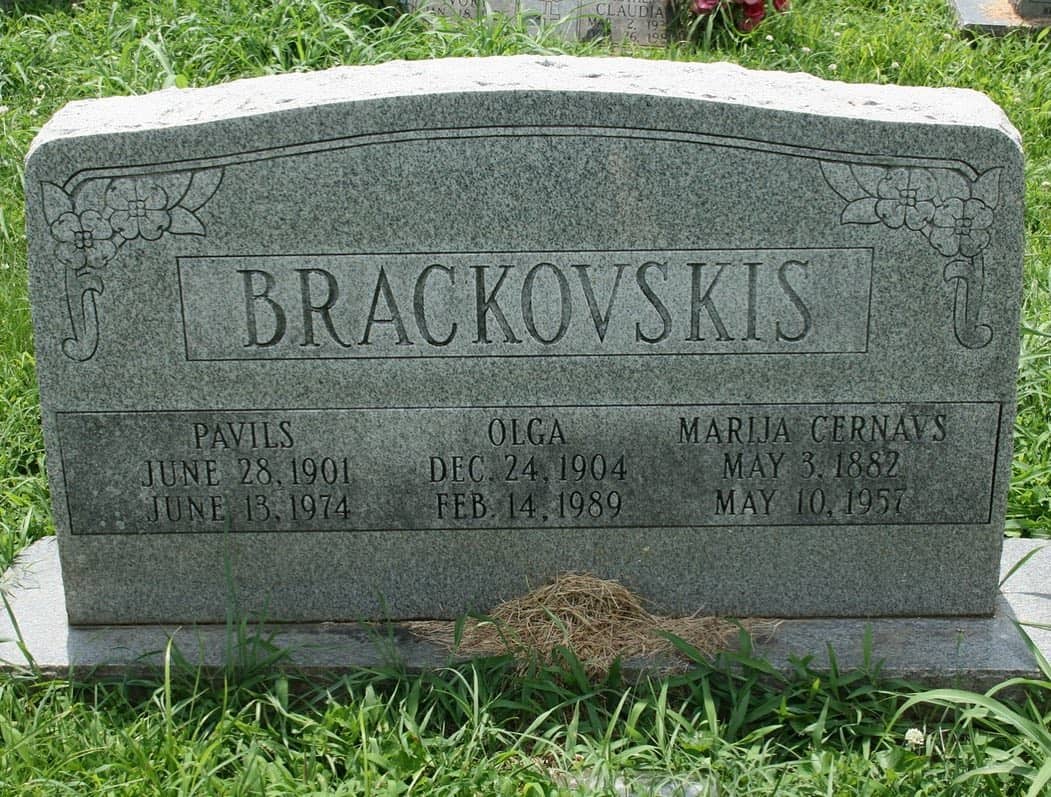