Posted on Sep. 9th, 2019 Comments Off on Private Kermit Caswell

For Memorial Day, we are featuring Private Kermit Caswell (1918-1944), the son of Hart County farmer John S. Caswell and Elizabeth (Bowman) Caswell. Kermit was the eldest of the five Caswell children and worked as a farmer. On November 6, 1942, Kermit enlisted in the Army. His enlistment records say he was 5’5” tall and weighed 116 pounds. Kermit was assigned to the 95th Infantry Division, which sailed to England on August 10-17, 1944. Then on September 15, 1944, the Division moved to France where they entered combat east of Moselle and south of Metz on October 19, 1944. The Division pushed toward the Saar during November and December 1944. Sadly, Kermit was killed in action on December 15, 1944 while in service of his country. His remains were not returned to the Caswell family for burial until April 1949, which is when his obituary was published. Thank you, Private Caswell for your sacrifice. You will not be forgotten. 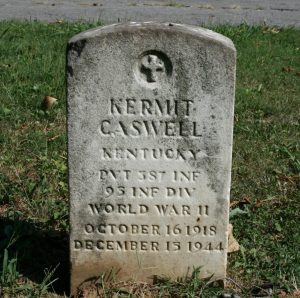