Posted on Sep. 9th, 2019 Comments Off on Private Titus Brooks

Titus Brooks was born July 17, 1896 in Weakly County, Tennessee to John and Julia Brooks. John worked as a day laborer throughout his whole life. By the time Titus was 14 years old he was working as a dropper in the tobacco field in which he dropped the tobacco plants in the rows for the planters. Everyone in the Brooks household held jobs as cooks, laborers, carpenters, and doing washing at home as was common for rural, lower class families. On September 27, 1918, Titus enlisted in the Army for World War I. He was sent to Camp Sherman in Ohio and assigned to the 40th Company, 10th Training Battalion, 158th Depot Brigade. Titus’s unit was comprised of African American soldiers who received and organized recruits; provided them with uniforms, equipment and initial military training; and then send them to France. The Depot Brigades also received soldiers returning home at the end of the war and completed their out processing and discharges. Brooks was honorable discharged on January 20, 1919 and returned home to his wife Maude and their son Timothy. The family soon moved to Louisville, Kentucky and lived in a rented house on E. Lee Street. Since Titus only had a second grade education, he worked more physical jobs such as plastering and gardening. He and Maude had a total of 10 kids. Titus Brooks died March 21, 1963 at the age of 66. He and Maude were buried at Eastern Cemetery. 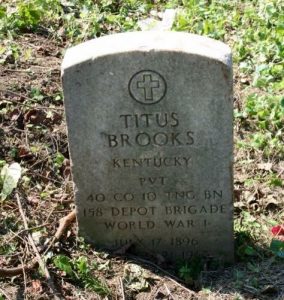