Rev. Andrew Heath (1832-1887) was born into slavery in Henderson, Kentucky. In 1843, Heath was sold to Knott, Wicks & Co. and he bought his freedom in 1858. He was a pastor at Fifth Street Baptist Church from 1866 until his death in 1887. He and his wife Lucy Hamilton, a former slave of Mrs. George Ormsby, had eleven children. Heath was a distinguished pastor in the community, and his funeral celebrated his life and achievements. Twelve African American pastors (including Dr. Simmons, J.H. Frank, and D.A. Gaddie) assisted with the funeral as well as six white ministers with members of his Masonic Lodge. Image from the “Golden Jubilee of the General Association of Colored Baptists in Kentucky.” 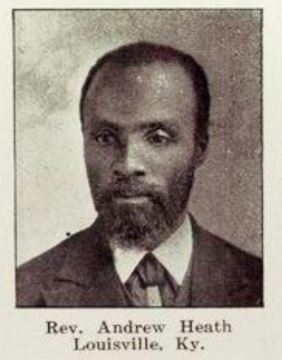