Rev. Dr. John H. Frank, Sr. (1859-1941) was baptized at the 5th Street Baptist Church where he eventually became minister for over fifty years and served as minister emeritus until his death. He was a Doctor of Medicine, graduating from the Louisville School of Medicine, and studied medicine in Germany. He was very active civically and helped form the Cave Dwellers Life Association, a life insurance company. Rev. Dr. Frank and his wife Clara had four children, one of which was John H. Frank, Jr. (circa 1895-1941). He was the first black man to serve Jefferson County as the Probate Commissioner, appointed by a Southern Democratic judge. John H. Frank, Jr. was an attorney for Brown and Frank and practiced law for eleven years. He preceded his father in death by six days. Image is of the Reverend and is from “The Golden Jubilee of the General Association of Colored Baptists in Kentucky.” 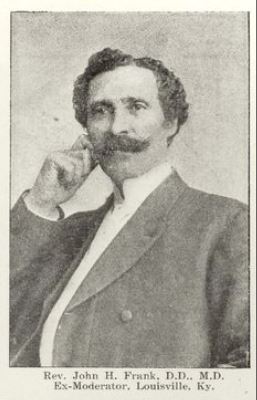