Ruthannetta “Ruth” (Gelthaus) Chambers (1909-1945) was born at 427 Campbell Street to German immigrants, Rudolph and Mamie Gelthaus, on February 13, 1909. At the age of 19, Ruth married divorcee James H. “Jimmy” Chambers. Jimmy was the biological son of Kate Ludwig and Anthony Leopold, and he was adopted at a very early age by George and Susie Chambers. Ruth and Jimmy were married in Jeffersonville, IN. The couple started their lives together in the Baxter Avenue area and later moved to 941 Fehr Avenue. Jimmy worked primarily as a chauffeur and Ruth as a telephone operator for the phone company. On February 6, 1931, Ruth gave birth to the couple’s only child James Chambers, Jr. On September 4, 1945, Ruth died at the young age of 36 from uterine cancer. She is buried at Eastern Cemetery not far from Jimmy’s adoptive parents. Jimmy went on to live an additional 54 years after Ruth’s death when he died in 1999 at the age of 94. He is buried at Calvary Cemetery with his third wife, Ruth (Brown) Chambers, who he was married to from 1950 until his death. Photos are from Find A Grave user “Tribute to our ancestors.” 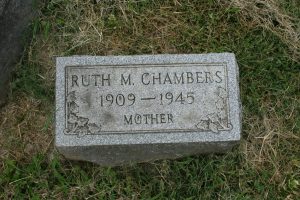