On Armed Forces Day we are celebrating the life of Air Force Staff Sergeant Walter Lee Garrison, Jr. (1931-1975). He was the son of Walter and Mamie (Fountain) Garrison who lived at 709 Roselane Street in the Smoketown Neighborhood. From 1949 to 1953, Walter served in the Air Force during the Korean War. This war was a turning point for many African Americans in the Armed Forces as the US Department of Defense allowed African Americans to serve in all combat and combat service elements. By June 1950, almost 100,000 African Americans were on active duty in the Armed Forces, which was about 8% of the total manpower. Walter was one of those African Americans. He also worked as a mail carrier for the US Postal Service and was a member of the Green Street Baptist Church and Chestnut Street YMCA. Walter had a daughter, Tia Lynn, with Lois (Mason) Everett. Walter died at Norton Hospital at the age of 44 after an illness. Thank you for your service. 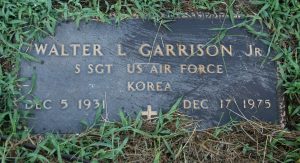